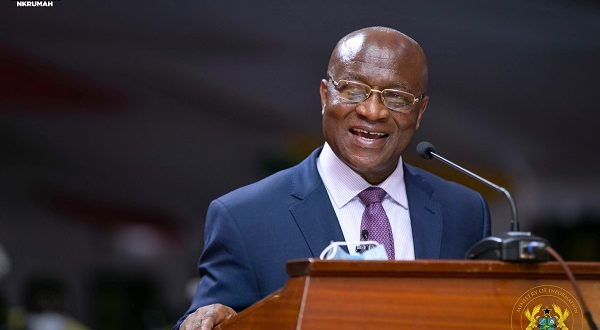 Ghana does not need a Vice President- Kyei-Mensah-Bonsu 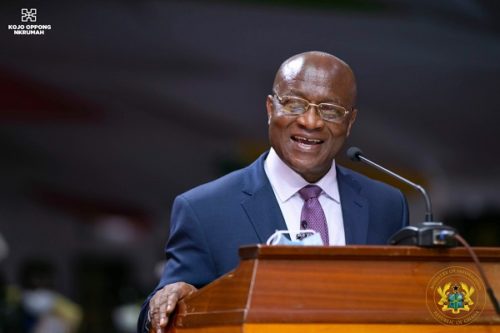 The Majority Leader in Parliament and Minister for Parliamentary Affairs, Osei Kyei-Mensah-Bonsu, has made a case for a comprehensive amendment of the 1992 Republican Constitution with a view to making the supreme law of Ghana a pragmatic rather than dogmatic legal document capable of changing the paradigm of the country’s democratic prospects and development.

Delivering a Lecture on the perspective of a Legislator on a Constitutional review in the Ashanti region, Mr. Osei Mensah Bonsu recommended for Ghana’s adoption, the Westminster form of democracy that involves both a President and Prime Minister instead of the current system of a President and Vice President which has huge cost burden on the individual politician, political parties and national coffers.

The Lecture was organised by the Kwame Nkrumah University of Science and Technology, KNUST as part of activities commemorating its 70th anniversary.

The event, which was participated by members of the university’s community, some MPs, politicians, traditional leaders and a cross section of the public, was on the theme: “Constitutional Review; The Perspective of a Legislator”.

Organisers of the lecture’s choice of the Speaker was based on his credential as one of the longest serving Members of Parliament and having risen through the various leadership structures of the House since 1997.

The Speaker, Mr. Osei Kyei-Mensah-Bonsu’s presentation covered the entire 1992 Republican Constitution as the supreme law of the country spanning the Preamble to the Transitional provisions.

Touching on the Executive arm of government, the Minister for Parliamentary Affairs disclosed that recent research outcome has estimated the cost of a presidential campaign at ¢400 million while that of an individual parliamentary aspirant needs a similar huge financial commitment with a serious repercussion on the country’s fight against corruption.

In his view, Mr. Kyei-Mensah-Bonsu suggested the adoption of the Westminster system that will replace a Vice President with a Prime Minister to cut down cost. He spoke also about the size of government based on the lawful discretion of the President.

“There is one principal reason, as a nation, we are marking time. We are stuck because many of our ministers are not adding value to our governance, that’s the truth!…and hasn’t the time come for us to place in the Constitution an upper ceiling on the number of ministers of state that we should have?” he asked rhetorically.

On the legislature, the Majority Leader called for a constitutional provision spelling out clearly the qualifications and functions of an MP as well as the Speaker of Parliament as pertains to that of the local government.

On the matter of parliamentary immunity, Mr. Kyei Mensah Bonsu said the law as it is now leaves too much room for the offending MP, Speaker or Clerk of Parliament too much room and also contrary to the provision of ‘equality before the law’ in the Constitution.

He said, “In recent times, some Members of Parliament have had encounters with the law enforcement agencies. Previous Speakers have had a way around this. But lately, some wranglings have dominated the airwaves about witch hunting….yet, the law is no respecter of persons. How do we address this conundrum?” the Majority Leader quizzed.

The Minister for Parliamentary Affairs, touching on the functions of the Electoral Commission, called for a law that will check the creation of new Constituencies with a focus to make representation in Parliament commensurate with population quota to ensure fairness while addressing the present wanton creation of new constituencies.

Mr. Osei Kyei Mensah Bonsu moved that the available Report of the Constitutional Review processes initiated by the Prof. Atta Mills government should be a guide to an eventual comprehensive amendment of the existing Constitution for the democratic process and national development.

The Chairman of the KNUST Public Lecture Committee, Dr. James Oppong-Kyekyeku, who expressed satisfaction with the performance of the Majority Leader, explained that, as an institution of higher learning and research, the KNUST considers it important to contribute toward shaping public policies and opinions.

I'm Odacitizen | Blogger | Promoter | Social Media Expert. I am the CEO and Manager of this noble website (Odacitizen.com). I publish on Entertainment, Sports, Politics, History and International News. You can also follow Us on YouTube Channel - Oda Citizen TV, Facebook- Odacitizen.com/Odacitizen, Twitter- Oda Citizen, Instagram- OdaCitizenOfficial. Email Address: odacitizen777@gmail.com. Contact Us on : 0553551970/0576674043
@Blogger Oda
Previous I’m ever grateful to whoever invented YouTube, it has saved me from poverty — Kwadwo Sheldon
Next I promise to do well in the next competition – Benjamin Azamati assures Ghanaians