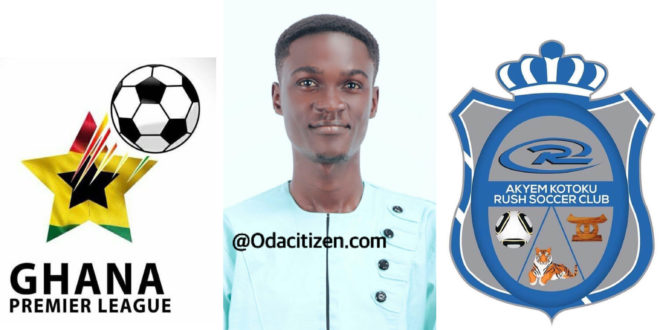 CAN KOTOKU ROYALS QUALIFY TO THE PREMIER LEAGUE? THE DYNAMICS AND ANALYSIS-Clement Asamoah 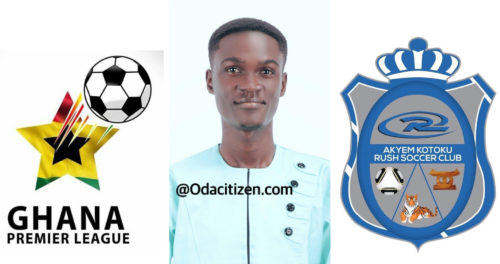 CAN KOTOKU ROYALS QUALIFY TO THE PREMIER LEAGUE? THE DYNAMICS AND ANALYSIS . 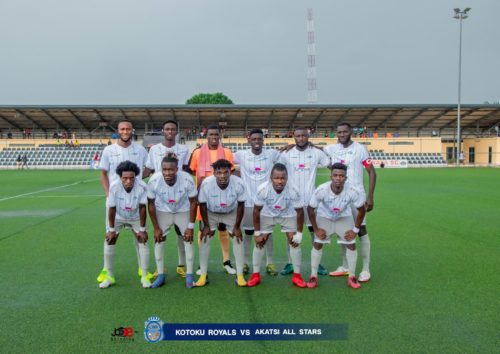 Akyem Kotoku Royals, a Division One league (Zone 3) team that is based in Akim Oda in the Eastern Region of Ghana is on the verge of gaining a historic promotion to the Ghana Premier League. That achievement will mean a lot to the team, the town and it’s populace because that will actually be the first Football Club from the aforementioned town to ever qualify to the top flight of Ghana football.

The Disciplinary Committee of the Ghana Football Association on Monday, 23rd May, 2022 ruled in favour of Kotoku Royals in their protest against Kpando Heart of Lions for fielding an unqualified player in their DOL Match Day 18. The Disciplinary Committee therefore awarded Akyem Kotoku Royals with three points plus three goals. The ruling moved Kotoku Royals to the top of the Zone with three matches to play so here, I take an in depth look at the dynamics involved in their final three matches especially in relation to their other two competitors that’s Tema Youth and Liberty Professionals who have all tasted top flight football before in their history. Kotoku Royals is the only team among the three teams yet to play in the Ghana Premier League.

Currently Kotoku Royals lead the other two with just one point. Kotoku is on 56 points with the other teams on 55 points and all these three teams have just three remaining games to play to determine who earns that sole slot of qualifying to Ghana Premier League. Mathematically all three teams can qualify but the onus lies in the hands of Kotoku Royals. They win all their three remaining games and they are through but they meet Tema Youth in the last game of their season. 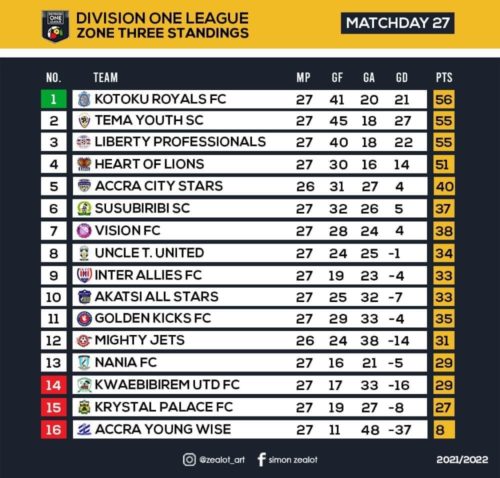 As a football fanatic I hope this goes down to the wire to make room for a crunching end of season football games. On current form and the oppositions they are going to face, all three teams can win the first two games of their remaining matches paving way for the title and qualification to be decided on the last Game Week of the season.

The dynamics vary in so many ways but it still lies in the hands of Kotoku Royals. Winning at Tema Youth will be difficult for Kotoku according to History. Kotoku Royals are yet to pick a win against Tema Youth at the Tema Sports Stadium so they will need to up their game if they are to pick the maximum points against the Harbour city Boys.

But they can also possibly pick a draw at Tema Youth and hope that Susubiribi SC, another team based in Akyem Tafo also in the Eastern Region do them some favour by winning or drawing against Liberty professionals and then they qualify. But it’s alleged and speculated that Mr. George Afriyie, the owner and bankroller of Susubiribi SC also has some shares in Liberty Professionals so that’s going to be an interesting match especially with it been the final game of the season and a potential title decider.

Regardless of what happens around, it still lies in the hands of Kotoku Royals. They win all their three remaining matches and they make history. Can Kotoku Royals qualify? Yes they can as well as the other two teams but they have to take all their three remaining games as cup finals, win all and they will see glory. In few weeks time, we will know which team actually qualified but for now, it’s Kotoku Royal’s qualification to lose.

I'm Odacitizen | Blogger | Promoter | Social Media Expert. I am the CEO and Manager of this noble website (Odacitizen.com). I publish on Entertainment, Sports, Politics, History and International News. You can also follow Us on YouTube Channel - Oda Citizen TV, Facebook- Odacitizen.com/Odacitizen, Twitter- Oda Citizen, Instagram- OdaCitizenOfficial. Email Address: odacitizen777@gmail.com. Contact Us on : 0553551970/0576674043
@Blogger Oda
Previous I will be happy, when I marry a Ghanaian Man – French Ambassador to Ghana Anne Sophie reveals
Next Happy Birthday Agya Koo! Check out this stunning photos of his 53rd Birthday 😍