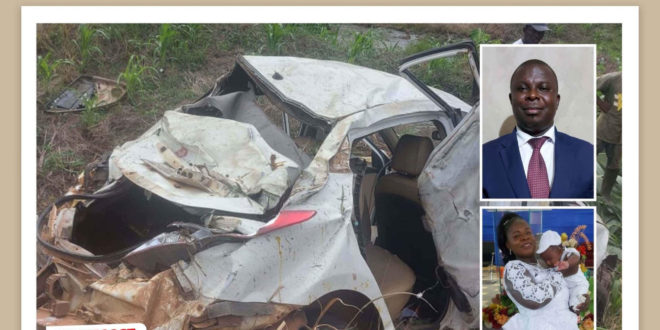 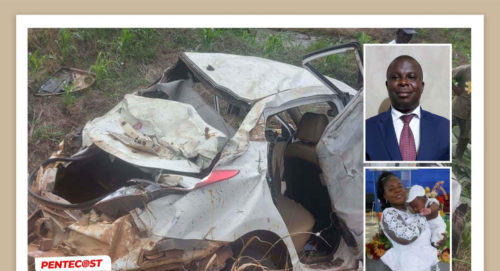 Elder Peter Dadzie, the Presiding Elder of Bethel Assembly, who also doubles as the District Financial Committee Chairman of New Awoshie District of The Church of Pentecost, was saved from a gory accident recently.

Present in the car with him were his brother, Elder Edward Dadzie, immediate past Presiding Elder of Mt. Zion Assembly, and Sister Juliana Gyane, who had a 10-month-old child.

In an interview with PENTECOST NEWS at a thanksgiving service at Bommoden Assembly, Elder Peter Dadzie revealed that they were returning from a funeral of a relative at Akim Aperade, in the Eastern Region of Ghana.

According to him, upon reaching Mepom, a town situated between Asamankese and Adeiso, the car he was driving had a tire burst.

“The vehicle somersaulted several times until it finally landed in the bush,” he said.

He said by the grace of God, they were rescued out of the severely damaged car, safe and sound, saying that: “We were taken to the Adeiso Government Hospital, and after three hours the doctors declared us fit to leave.”

I'm Odacitizen | Blogger | Promoter | Social Media Expert. I am the CEO and Manager of this noble website (Odacitizen.com). I publish on Entertainment, Sports, Politics, History and International News. You can also follow Us on YouTube Channel - Oda Citizen TV, Facebook- Odacitizen.com/Odacitizen, Twitter- Oda Citizen, Instagram- OdaCitizenOfficial. Email Address: odacitizen777@gmail.com. Contact Us on : 0553551970/0576674043
@Blogger Oda
Previous King of Kasoa EP by Adomba Effah hits 205.3k streams on boomplay in less than a month
Next Blow-by-blow account of how KNUST fresh girl was ‘gang-raped’ by L.400 & police officer