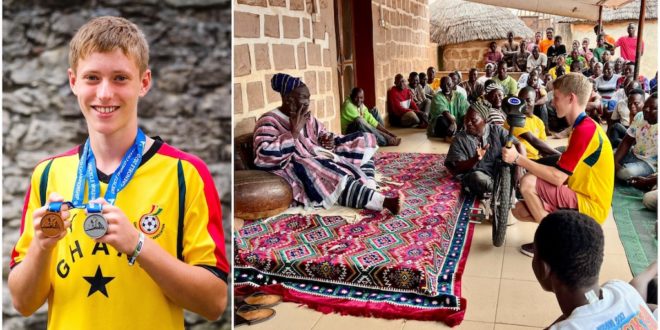 Roger Trey Haun has earned a special place in the hearts of Ghanaians. 😍 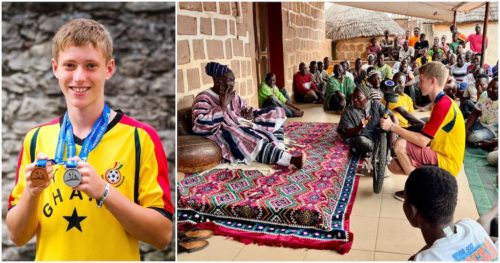 US-born Ghanaian Unicyclist Roger Trey Haun was given a reception to cherish for the rest of his life following his return to Nalerigu The 15-year-old unicyclist presented his medals to the paramount chief of Mamprugu, Naa Bɔhagu, after his outstanding accomplishment in France Trey Haun won two medals, silver in the 30m Wheel Walk Race and bronze in the 50m One-Wheel Race for Ghana, the nation’s first at the Unicycling World Championship American-born Unicyclist Roger Trey Haun received a heroic welcome on his return to Nalerigu following his exploits at the just-ended Unicycling Championship in France. Trey Haun enshrined his name in the hallowed books of Ghanaian sports history when he became the first Ghanaian to win medals at the Unicycling Championship. The 15-year-old young rider won silver and gold at the championship, which has been greeted with a lot of fanfare by Ghanaians.

Roger Haun and his family have been living in the North East region of Ghana since he was one and the young rider speaks fluent Mamprusi, a local dialect in the northern part of the country.

Following his remarkable achievement of hoisting the flag of Ghana in unicycling, Trey and his father, William Haun, returned to Ghana on Tuesday, August 9 and received a raucous welcome. They were greeted by the Mamprusi community before heading to the palace to pay homage to the custodian of the land, Naa Bɔhagu, paramount chief of Mamprugu.

The US-born Ghanaian teenager earned Ghana’s maiden medals – silver and gold – at the Unicycling championship held in France. He won a €100 Decathlon gift card at the championship for his feat and proceeded to the store to buy his unicycling teammates Dan and Osman Salifu, based in Ghana, the rollerblades and skateboard – which has been on their wishlist for a long while.

I'm Odacitizen | Blogger | Promoter | Social Media Expert. I am the CEO and Manager of this noble website (Odacitizen.com). I publish on Entertainment, Sports, Politics, History and International News. You can also follow Us on YouTube Channel - Oda Citizen TV, Facebook- Odacitizen.com/Odacitizen, Twitter- Oda Citizen, Instagram- OdaCitizenOfficial. Email Address: odacitizen777@gmail.com. Contact Us on : 0553551970/0576674043
@Blogger Oda
Previous It Was Just Damage Control For Her’ – Ayesem Says As He Reacts To Sista Afia’s Suggestions That He Is ‘Immature’
Next IGP speaks on changing face of policing at KNUST lecture today