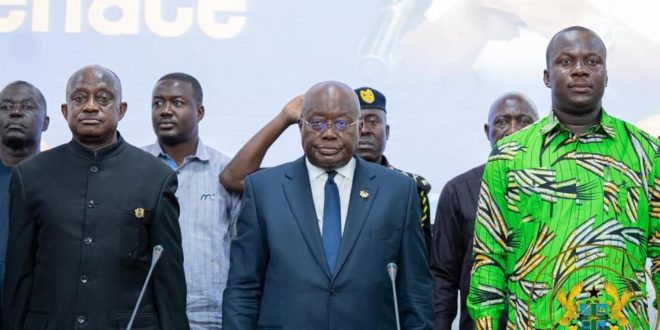 We must win Galamsey fight to secure our heritage – Nana Addo to MMDCEs, Chiefs 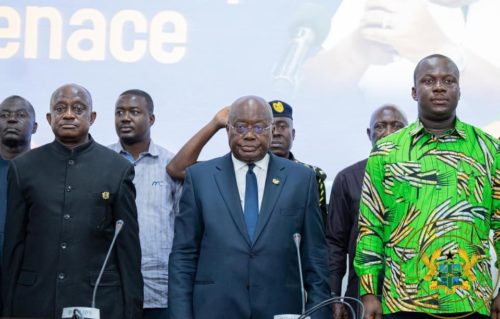 Mr Akufo-Addo said the fight against this menace must be won to protect the heritage for the next generation.

Speaking at a meeting with the Chiefs and the MMDCEs in Kumasi and monitored by myrepubliconline.com on Wednesday, October 5, he said “I ask all of you to join hands in the fight against illegal mining. We have to win that fight, to protect our heritage for the next generation.”

He further intimated that 80 percent of the lands in Ghana are in the custody of the chiefs.

This means that they have a role to play in protecting the resource, he said.

He said “80 percent of the lands in this country continue to be under your custody, much of it having been acquired through the blood and sacrifices of your ancestors. The remainder of 20 per cent which I hold in the trust of the people of Ghana, derived from state acquisition from you. What this means is that ultimately, the welfare of the state of the lands is our joint responsibility, although by statute the minerals in the soil belong to the president in trust for the people.”

The chiefs on their part assured Mr Akufo-Addo that they are solidly behind his administration to apply appropriate measures against all persons involved in Galamsey in the country.

President of the National House of Chiefs, Ogyeahohoo Yaw Gyebi indicated that galamsey is having a negative effect on the environment and also threatens revenue mobilisation in the country hence, their resolve to support the President and government in fighting it.

He said “your relentless war against forest degradation and illegal mining in Ghana is of great importance to Ghanaians, especially we the chiefs.

“The effects of illegal mining on the environment threaten the survival of water bodies, farmlands, cocoa industry and even encouraging school dropouts, this undermines the revenue mobilisation drive in the country.

“In view of this development [the Chiefs] are solidly behind your administration to apply the appropriate sanctions against persons who are engaged in the practice of illegal mining irrespective of their status.”