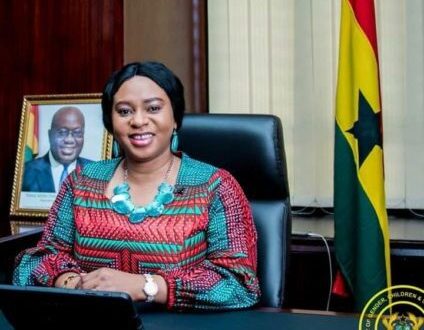 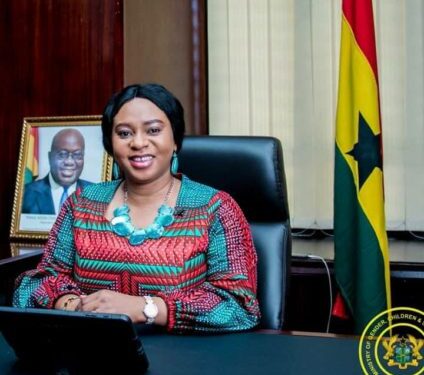 In a statement by the Director of Communications at the Presidency, Eugene Arhin said the President in accordance with article 81 (a) of the constitution revoked the appointment of Sarah Adwoa Safo, who is also Member of Parliament for Dome Kwabenya.

The decision by the President comes at a time when Parliament is debating her continuous stay in the house after absenting herself for more than 15 sitting days without approval from the speaker of Parliament.

The Speaker of Parliament, Alban Bagbin, earlier today deferred his ruling on Dome Kwabenya MP, Sarah Adwoa Safo, who has been cited for absenteeism.

At stake was whether the Dome Kwabenya seat would have been declared vacant after Adwoa Safo did not honour her summons by the Privileges Committee, which considered her absenteeism.

Speaking after a debate on the report by the Privileges Committee, Mr. Bagbin said he needed time to submit a written ruling.

See the picture below; 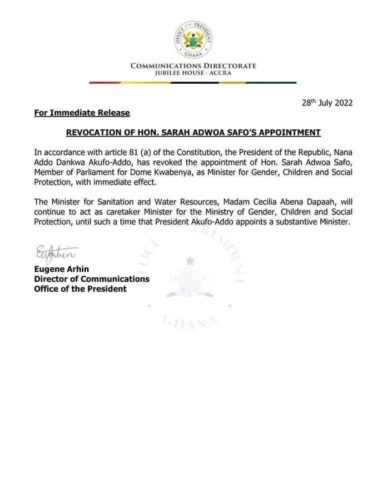 I'm Odacitizen | Blogger | Promoter | Social Media Expert. I am the CEO and Manager of this noble website (Odacitizen.com). I publish on Entertainment, Sports, Politics, History and International News. You can also follow Us on YouTube Channel - Oda Citizen TV, Facebook- Odacitizen.com/Odacitizen, Twitter- Oda Citizen, Instagram- OdaCitizenOfficial. Email Address: odacitizen777@gmail.com. Contact Us on : 0553551970/0576674043
@Blogger Oda
Previous I can’t in a haste give a ruling on Adwoa Safo; I need time to do that – Bagbin
Next He R@Ped Me On 19th, He Can Get Off On Technicality” – Lady Who Accused Thomas Partey Breaks Silence