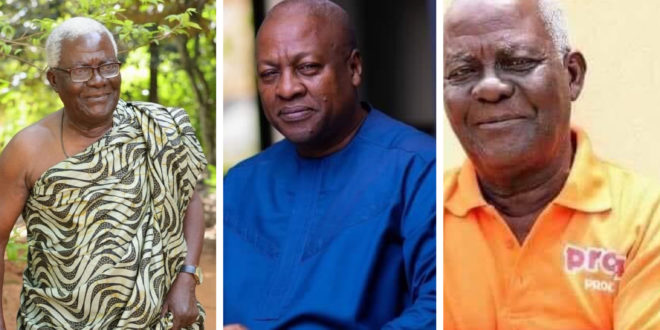 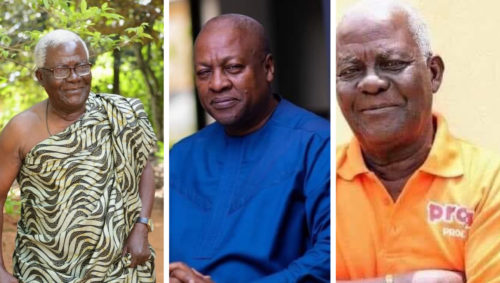 Veteran Actor, Paa George has expressed his profound gratitude to ex-President John Dramani Mahama for his sustained support for veterans.
According to him, the former President’s benevolence to keep them going comes quarterly.

“Every 3 months we meet at Adabraka to collect assorted items such as rice, oil, sardine, mackerel, and cash sent by Mr. Mahama, Paa George told TV and Radio personality, Agyemang Prempeh on the Legend Show on TV XYZ.

The veteran actor, who sounded passionate, revealed that the former President’s gesture was influenced by the painful story of the late Asonaba Kweku Darko, popularly known as Super OD when he attended his funeral.

“Mahama has since contributed to the strength I have now. I didn’t come here to do politics but ever since OD died he’s been there for us…” he emphasized.

The veteran actor stated that every three months he receives assorted items with cash from Mahama through his colleague Mr. Beautiful.
On his relationship between himself and the former President, Paa George explained that he’s never been to Mr. Mahama’s house yet he receives the periodic stipend.

There has been widespread public concern about the plight of many veterans in the entertainment industry for lack of a better government policy to cater to them in old age.

Many of such personalities have died out of misery or ill health or have publicly solicited for public support to survive.

Among those who are on record to have ended up in this sad situation in recent times is the late Psalm Adjeteyfio, aka TT.

He became popular with the Taxi Driver television series in the early 2000s.
TT in his last days openly begged for support and is on record to have received Vice GH¢50,000 from the Vice President, Dr. Mahamadu Bawumia among other financial and material support from other well-wishers. He passed on Friday, April 8, 2022.

William Addo, aka Akpatse, is currently totally blind and depends on philanthropists, including former President John Mahama for his upkeep.

The actor was in the news recently when he made a passionate appeal to President Nana Addo Dankwa Akufo-Addo to come to his aid.

Another actor, Emmanuel Armah is also battling stroke and in the same category.

Kofi Laing, popularly known as Kohwe, also died in abject poverty at the age of 75. He battled a stroke for months before he gave up. Kohwe, before his death, was said to be receiving some financial support from many well-wishers including Mr. Mahama.