Earlier today, there was a social media back and forth between Shatta Wale and Bulldog, with the African dancehall king accusing Bulldog of murdering music producer and artiste manager, Fennec Okyere

Shatta Wale’s allegations against Bulldog over the murder of Fennec prompted Hiplife musician, Kwaw Kese to ask Ghana police to conduct an investigation into the death of his former manager, for whom he had already sought justice for years.

However, the Ghana police have reacted to Kwaw Kese’s plea, stating that they will conduct further investigation into how Fennec was murdered since May 2014.

1. The attention of the Ghana Police Service has been drawn to a Facebook post by Charles Nil Armah Mensah Jr., popularly known as Shata Wale regarding the death of artiste Manager Fennec Okyere.
2. The Police have made contact with Shata Wale who is cooperating with us on the matter
3. The Police would like to put on record that the recently established Cold Case Unit, has been working for months on all unresolved murder cases, including that of Fennec Okyere with support from the affected families.
4. This new development from Shat Wale is therefore going to complement our ongoing investigation.
5. We would like to take this opportunity to thank all the families who have been working with the Cold Case Unit since its establishment for their cooperation and understanding.
6. We wish to assure the public that the Police will continue to work relentlessly on these cases in order to bring closure to the affected families. 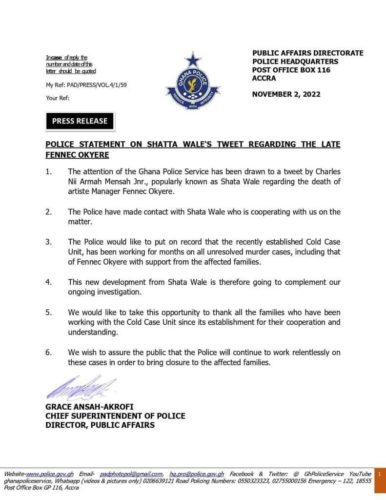 Meanwhile, netizens have begun to share their thoughts on Shatta Wale and Bulldog’s social media feud after police issued an official statement indicating that the matter was once silent, but Shatta Wale has resurrected it.

Others have praised the police for their excellent work, but they have also suggested that this was not the only murder case should be investigated but they should look into some other cases that are still unknown to the public.