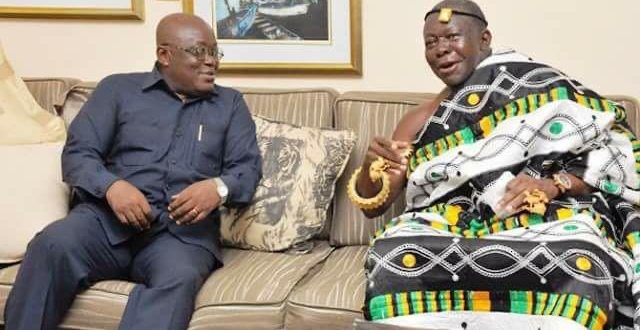 Your tenure has been beneficial for Asanteman’ – Otumfuo to Akufo-Addo 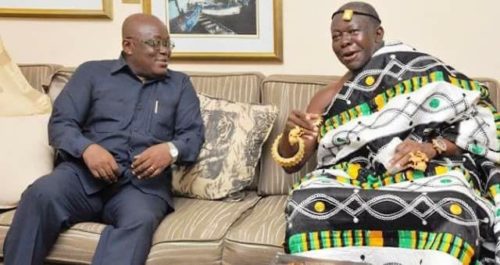 The Asantehene, Otumfuo Osei Tutu II, has commended President Akufo-Addo for his consistent show of attention to Asanteman.

He said the presidency has thereby situated the region in a position of prominence and honour in terms of development in the country.

According to the overlord of the Asante Kingdom, he has followed with keen interest the tenure of President Akufo-Addo since 2017.

He stressed that “issues of key concern to the development of Asanteman have been placed on the front burner of government’s development agenda.”

Otumfuo Osei Tutu II made this known on Sunday, when the President paid a courtesy call on him at the Manhyia Palace, at the commencement of his four-day working visit to the Ashanti Region.

“On the occasion of your visit four-day visit here, which has become a regular feature, I am happy you are here to commission and inspect the projects undertaken by your government for all to see that, indeed, under you, Asanteman has benefited, he said.

Continuing he said, “you have served us well and brought honour to Asanteman in the two terms that you have served as President. Therefore, I can only ask of the blessings of Almighty God and that of the ancestors for continued strength to serve Ghana.”

President Akufo-Addo, on his part, said the visit to the Ashanti region was part of his yearly routine to visit all the regions across the country to acquaint for himself and deliver first-hand the development needs of the people.

He said, “at the end of his four-day tour of the region, all will know that indeed Asanteman has benefitted significantly in terms of development.”

President Akufo-Addo indicated that “nearly 350 kilometres of Asphaltic Road network have been done in the Ashanti region.

“Some 32 separate hospital projects have been done in my time in the Ashanti region.”

Touching on the galamsey menace, the President stated that “I am also happy that the issue of illegal mining has become topical during my administration.

Touching on the galamsey menace, the President stated that “I am also happy that the issue of illegal mining has become topical during my administration.