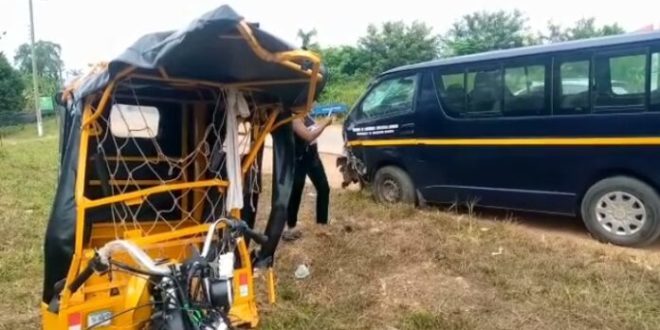 Central Region: Pastor Crushed To Death By UEW Bus; 6 Others In Critical Condition 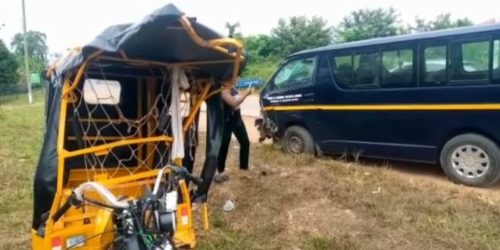 A minibus belonging to the University of Education, Winneba (UEW) has crushed a Christ Apostolic Pastor identified as Solomon, to death at Ajumako Techiman in the Ajumako Enyan Essiam district of the Central Region.

Information gathered revealed that, the church members numbering about seven were coming from Church at Ajumako to Techiman and were all in the tricycle around 11:00 p.m. on Tuesday when the accident occurred.

According to report, the driver of the UEW Ajumako Campus bus was drunk he crushed the tricycle killing the pastor instantly.

It was also reported that the tricycle with registration number, M-22-GR-8999 was nearly set ablaze during the accident.

Eyewitnesses blamed the bus driver for causing the accident.

According to them, the excessively drunk driver veered off his lane and run into the tricycle which was carrying the church members.

Six of the church members were seriously injured and are receiving treatment at the Ajumako Government Hospital.

Meanwhile, the case has been reported to the Ajumako District police station pending investigations.

The driver of the vehicle is also receiving treatment at the same Hospital.

The body of the deceased has been deposited at the Saltpond Hospital Mortuary for autopsy and preservation.

I'm Odacitizen | Blogger | Promoter | Social Media Expert. I am the CEO and Manager of this noble website (Odacitizen.com). I publish on Entertainment, Sports, Politics, History and International News. You can also follow Us on YouTube Channel - Oda Citizen TV, Facebook- Odacitizen.com/Odacitizen, Twitter- Oda Citizen, Instagram- OdaCitizenOfficial. Email Address: odacitizen777@gmail.com. Contact Us on : 0553551970/0576674043
@Blogger Oda
Previous Abedi Pele And Wife Maha Celebrate 35th Wedding Anniversary.
Next It Was Just Damage Control For Her’ – Ayesem Says As He Reacts To Sista Afia’s Suggestions That He Is ‘Immature’