The celebrated taxi driver who returned GHC8,400.00 which was left in his car to the owner has been presented with an integrity award at the Global 28 COE (Credentials of Entrepreneurship) Awards night in Accra during the weekend.
The 37-year-old Kwesi Ackon says he wants to be an ambassador to educate the youths on integrity.
Kwesi says educating youths on the subject matter will go a long way to addressing social vices and corruption among the youths.
The high level of morality and truthfulness the taxi driver displayed in his work gained him enviable integrity accolades when the story broke.

He made news headlines in May this year after he decided not to consume the huge money said to have been abandoned in his car by a fishmonger who had patronized his service. Instead, he returned it – a gesture that left many people shocked but at the same time, gave hope that there are still good people among the numerous bad ones.

Ackon won the admiration of many notable people including Vice President Bawumia who gifted him GHC 20, 000.00.

Aside from the vice president, veteran footballer, Asamoah Gyan was also reported to have given Ackon GHC 10, 000. 00. He also reportedly received GHC 5,000.00 from popular young musician, Kidi.

The story of Ackon is a testament to the fact that integrity pays. 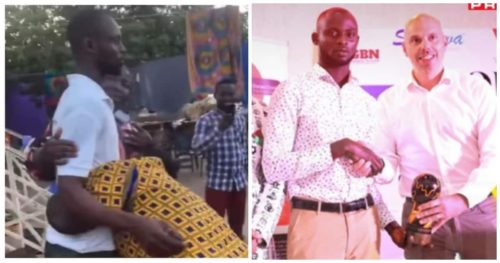