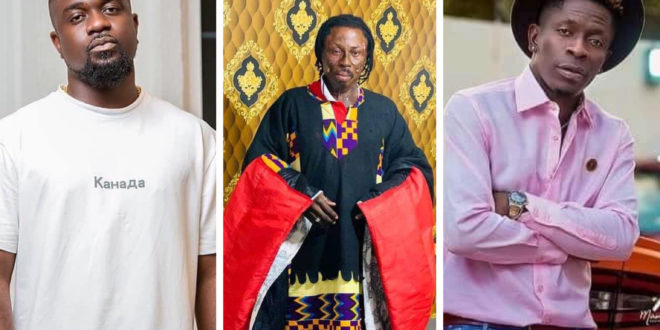 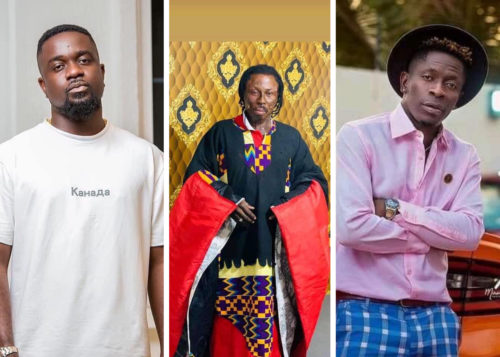 In the African setting, people name their children after their loved ones, to show appreciation or show how they value them.

Popular fetish priest, Nana Kwaku Bonsam has said he has named his children after Shatta Wale and Sarkodie because of the love he has for them.

According to the fetish priest, Shatta Wale and Sarkodie are very dear to his heart, hence naming his children after them.

“Shatta Wale and Sark are my favourite artistes, that is why I have named my children after Shatta and Sark. My daughter’s name is Yaa Shatta Bonsam, and Sark too.

“It’s official, it’s on their birth certificate. I can show it to you right from my phone,” he told Larry the Oldman on Onua FM’s Anigye Mmere show Monday, July 25, 2022.

He further asserted Shatta Wale’s ‘I know my level’, Stonebwoy’s ‘Putuu’, and Sarkodie’s ‘Saara’ are his favourite songs, and he will be glad to meet them in person.

“Amongst the musicians, I’ve only met a few. I met Daddy Lumba at Nkoranza at a programme and Samini in America. I would love to meet Sarkodie and Shatta. I will be very happy to meet them,” Kwaku Bonsam concluded.

He ventured into politics in 2020 to represent the people of Offinso North in Parliament but lost. He has said he didn’t consult his gods earlier, the reason he lost. Meanwhile, he has hinted his intention to contest in 2024, promised to send the gods to Parliament to curb corruption and embezzlement.

I'm Odacitizen | Blogger | Promoter | Social Media Expert. I am the CEO and Manager of this noble website (Odacitizen.com). I publish on Entertainment, Sports, Politics, History and International News. You can also follow Us on YouTube Channel - Oda Citizen TV, Facebook- Odacitizen.com/Odacitizen, Twitter- Oda Citizen, Instagram- OdaCitizenOfficial. Email Address: odacitizen777@gmail.com. Contact Us on : 0553551970/0576674043
@Blogger Oda
Previous I Will Get A Divorce If Marriage Stresses Me Out”-Mzvee Says
Next Keep faith with Akufo-Addo, he can do it – Ofori-Atta rallies Ghanaians