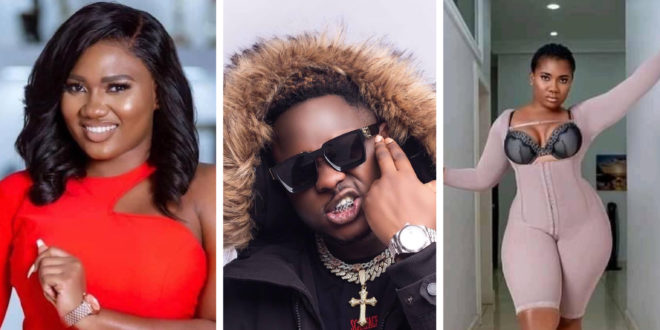 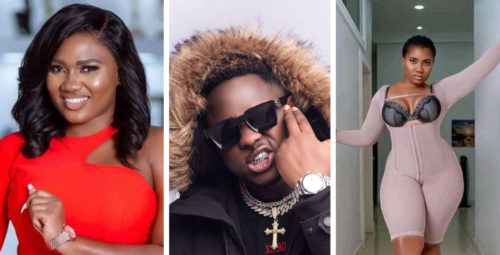 Controversial Ghanaian socialite, Abena Korkor Addo, has asked Medikal to pay him some royalties for throwing the spotlight on her, in his new single.

Medikal released a new hit song titled ‘Abena Korkor’ which has since been banging on the airwaves and at various events.

The cover artwork of this particular track has a cartoon portrait of Abena Korkor holding a stack of money fully embroidered on it.

Asides from the fact that the song was named after Korkor, there were parts of the track that touched on her ‘name dropping spree’, that is, mentioning names of celebrities she claims to have slept with.

“I am Abena Korkor. I kiss and tell,” Medikal mentioned in a part of the song.

Following the release of the popular jam, Abena Korkor has been captured on several occasions on social media, jamming to it with full excitement.

Korkor seemed happy that she somewhat inspired a song from the award-winning rapper.

But in a new twist to events, Abena Korkor in an interview has asked to be paid some monies for the use of her name in the song.

Asked whether Medikal’s name is on her famous list, Abena Korkor said;

I'm Odacitizen | Blogger | Promoter | Social Media Expert. I am the CEO and Manager of this noble website (Odacitizen.com). I publish on Entertainment, Sports, Politics, History and International News. You can also follow Us on YouTube Channel - Oda Citizen TV, Facebook- Odacitizen.com/Odacitizen, Twitter- Oda Citizen, Instagram- OdaCitizenOfficial. Email Address: odacitizen777@gmail.com. Contact Us on : 0553551970/0576674043
@Blogger Oda
Previous I came to Accra in a truck full of cows to start life – Sherifa Gunu
Next Azamati Benjamin Named National Athlete of the week in America