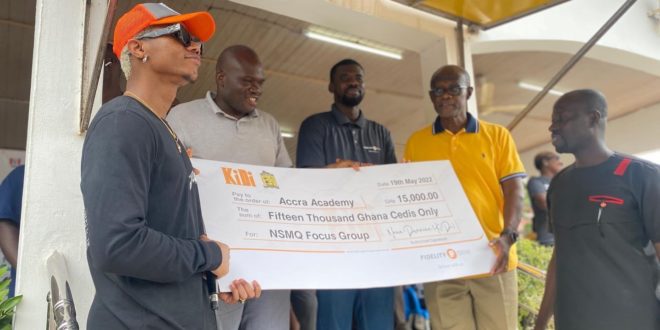 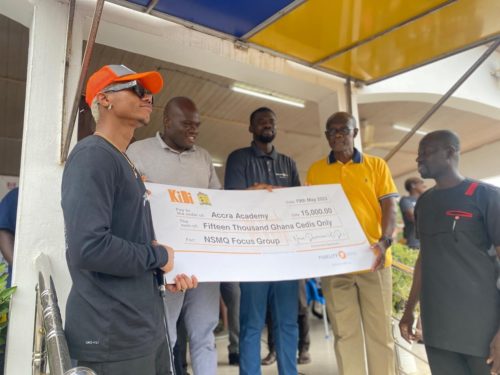 2022 VGMA artiste of the year KiDi has paid a visit to the Accra Academy to show his appreciation to the school’s management, teaching staff, past and current students for the support showed his music for a period spanning more than a decade.

After presenting his recently won coveted awards of _Artiste of the Year_ from both the Vodafone Ghana Music Awards and 3 Music Awards to a section of the management and Old Boy Secretariat, he toured the campus of the school making stops at his former classrooms, his former Hall of residence (Ellen Hall), the Canteen, the Old Boy Secretariat and the NSMQ Focus Study Area.

Interacting with some students of the school under training for the NSMQ competition, he urged them to study diligently to be able to possess the answers on the NSMQ Finals stage. KiDi also donated a cash sum of fifteen thousand cedis to the NSMQ Focus Group of the school as a gesture to indicate his interest in the progress of the group.

The Music Artiste of the Year also presented thirty takeaway meals from the food brand KFC, another brand he represents as an Ambassador.

Kidi graduated from the Accra Academy exactly a decade ago in 2012. Whilst in the school, he begun taking the stage as a student musician at internal entertainment activities of the school and contributed to the formation of a famous Accra Academy musical group known as ABC.

Out of the school, he pursued university education alongside his musical career; joining the MTN Hitmaker Talent Show where he gained nationwide fame by winning an edition of the Show.

I'm Odacitizen | Blogger | Promoter | Social Media Expert. I am the CEO and Manager of this noble website (Odacitizen.com). I publish on Entertainment, Sports, Politics, History and International News. You can also follow Us on YouTube Channel - Oda Citizen TV, Facebook- Odacitizen.com/Odacitizen, Twitter- Oda Citizen, Instagram- OdaCitizenOfficial. Email Address: odacitizen777@gmail.com. Contact Us on : 0553551970/0576674043
@Blogger Oda
Previous Five Perished in Gory Accident at Fanteakwa
Next Three Students of Wenchi SASEC Injured After School Building Collapsed on them during a rainstorm